And it's looking increasingly unlikely that the House and Senate will agree on a plan to save the Postal Service by May 15, when a moratorium on closing postal processing plants expires.

Rep. Darrell Issa of California, who has authored a House plan to save the Postal Service, called the Senate bill "wholly unacceptable."

Aides say Republican leaders don't feel pressured to take up the House bill right away, because they're not worried about postal closures. In fact, the House legislation paves the way for more closures, as well as the end of Saturday service.

Save Money On Shipping

The House bill also breaks union contracts, making it easier to lay off postal employees or force those eligible to retire. 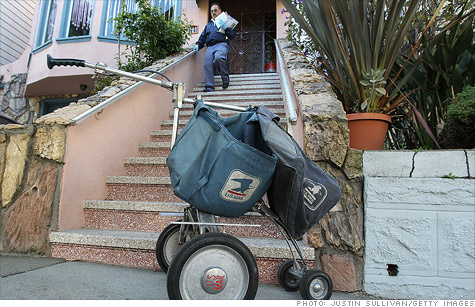 The recession, declining mail volume and a congressional mandate to prefund retirement health care benefits have put the service in a bind. It reported a $5.1 billion loss for the year ended Sept. 30.

One of the things that Postal Service chiefs and House Republicans don't like in the Senate bill are all the extra roadblocks that would prevent the closing of postal plants and offices. They also don't like how senators delayed the elimination of Saturday mail service by at least two years.

The House bill would give the Postal Service two years to make drastic cuts to plants, offices and Saturday service. If the cuts don't take, the House bill sets up an independent panel that would supplant the U.S. Postal Service board and make the cuts.

There are similarities between the House and Senate bills. Both give the Postal Service the ability to borrow more, in different situations. And both tap an $11 billion overpayment in the Federal Employees Retirement System to pay down postal service debt.

But the Senate would also use that money to offer buyout packages to entice long-time employees to retire. The House doesn't force the postal service to use that money on incentives.

The House would limit the Postal Service's ability to tap future overpayments in the retirement service.

Unions don't like either bill. But they particularly don't like the House bill, as it would "gut collective bargaining," according to the American Postal Workers Union.

The House bill also continues to require that the Postal Service make regular billion-dollar payments to Treasury to prefund health care benefits for retirees, which the unions blame as the main culprit of the service's woes.